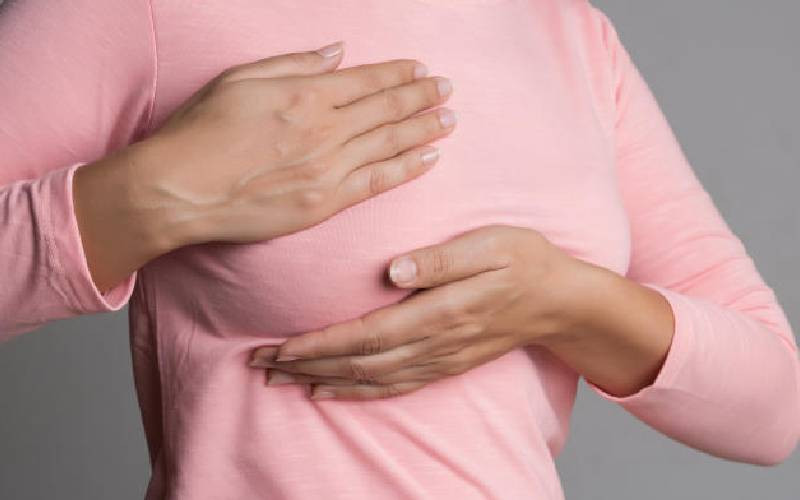 She had mixed emotions after developing a pimple on her left breast.

The shock and pain forced Mary Nyambura, 45, of Pipeline in Nakuru, to seek medicine. She was diagnosed with stage three breast cancer.

It was her first breast cancer screening. She was placed on chemotherapy and after completion she underwent a mastectomy.

“Cancer took me by surprise. I would have liked to be gentle with myself by undergoing regular screenings. Maybe the cancer cell could have been caught earlier,” says Mary, who was diagnosed in October 2020.

“The disease brings a lot of fear and emotion, but hope keeps me going.”

Mary is not the only breast cancer patient in old age, hundreds of women in Kenya are diagnosed with stage three and four breast cancer.

Data from the Kenya National Cancer Registry 2014-19 (KNCR) shows that seven out of 10 cancers are diagnosed at advanced stages (stage three and stage four). Additional data from the National Cancer Institute of Kenya (NCIK) shows that breast cancer is the leading type in Kenya with an estimated 6,799 cases per year, contributing 12.5% ​​of the overall cancer burden.

Breast cancer is responsible for more than 3,107 deaths, making it the second leading cause of all cancer deaths in the country. At least seven women die every day in Kenya from breast cancer. However, Ruth Muia, head of the Department of Cancer Prevention and Care Spectrum at NCIK, said nearly 70% of breast cancer cases in Kenya are diagnosed late when the chances of curative treatment are low.

“Breast cancer is curable if detected early, but the majority of patients present in stages three and four when the cancer cells have spread, making it difficult to treat and cure,” Muia said.

According to the report, examination for cancer is likely to be lower among women in rural areas as well as among those of low socioeconomic status.

For her part, Dr Juliet Maina, a clinical radiation oncologist at Nanyuki Teaching and Referral Hospital, said the country was grappling with breast cancer awareness as women feared “the unknown”. during screening.

Most women, she said, feel they would rather stick with it, only to be diagnosed at later stages when they cannot be cured. Breast screening aims for early diagnosis and prompt treatment and therefore improves prognosis and outcome.

“I am surprised that patients prefer not to know their status. They suspect, but they are afraid to get screened and examined,” Dr Maina said.

The clinical radiation oncologist explained that cancer screening can be done either by clinical examination, self-examination or mammography, an international screening modality for people over 40.

The test aims to identify healthy women who may have as yet undiagnosed or asymptomatic cancer, or who may have risk changes or precancerous changes in the breast that would signify an increased risk of breast cancer.

“It is compulsory for every woman over the age of 50 to have a mammogram every year, but very few people know about it, although breast cancer is the most common malignancy in women and is associated with high mortality,” Dr Maina said. .

In 2016, the government, through the Managed Equipment Service (MES) project, introduced digital mammography machines distributed across 47 counties to aid in the diagnosis of the disease.

The installation of the machine was a major upgrade from the previous 11 analog mammography machines in public hospitals.

An impact study conducted by the ministry in 2018 showed that the decentralization of mammography has increased geographic access to services.

But even with the introduction of digital mammograms, screening remains low.

In Baringo, only 11 women were tested between February and September. County health officer Richard Rotich attributed the low uptake of screening to residents’ lack of information about the importance of cancer screening.

“It is worrying that people are afraid of cancer and therefore do not take screening seriously. There is misinformation that we are debunking that cancer is a death sentence,” Rotich said.

For her part, Maina said, “Most people don’t understand the concept of a mammogram, even the scholars and the elite. People have been reluctant over the years to get tested, a trend that is worrying”

The expert attributed the low participation in mammography examinations to the lack of specialists (a radiologist and oncologists), unlike the cervix which can be carried out by a clinician, doctors or nurses.