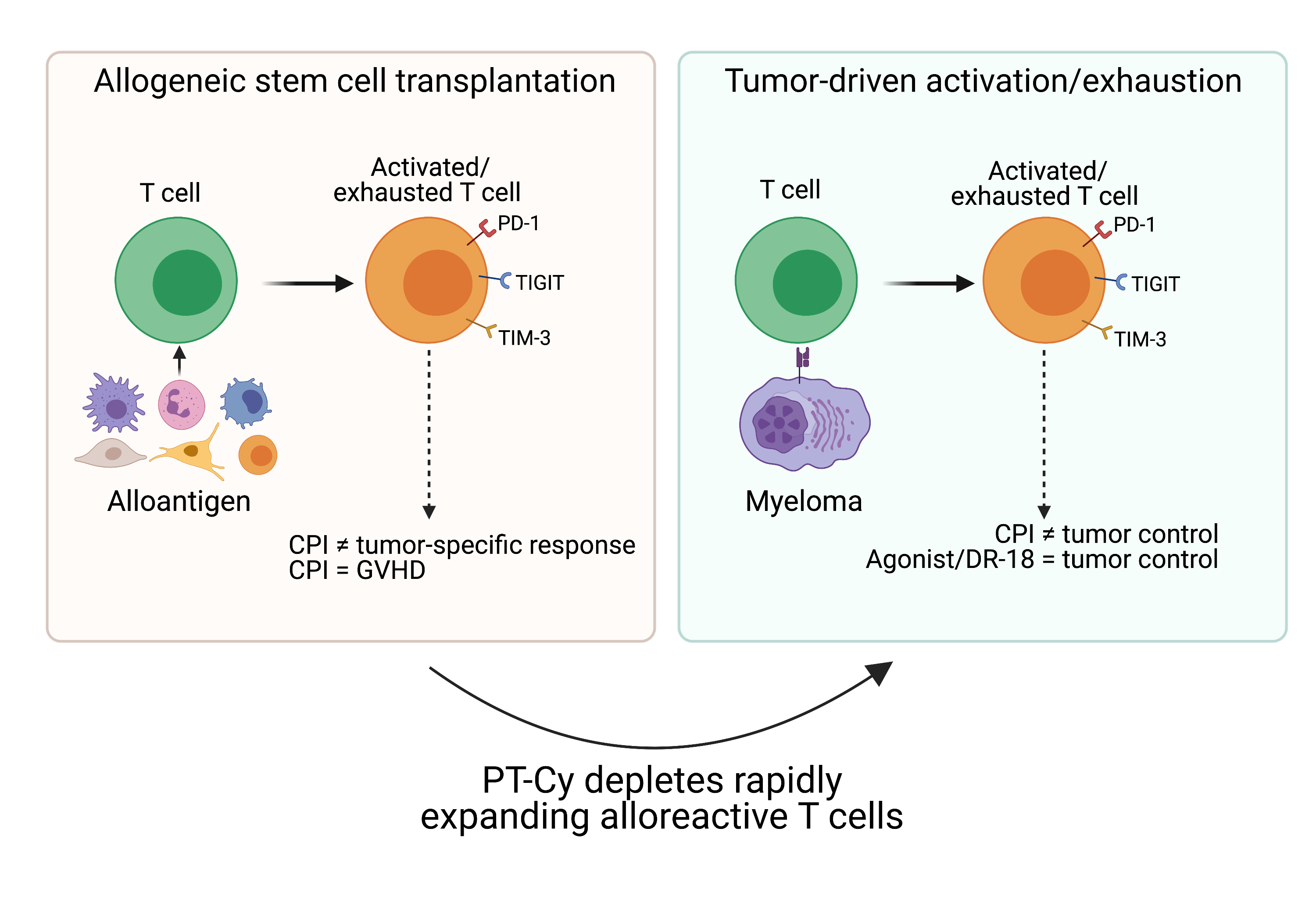 Finding cures for cancer or other diseases can often be a matter of taking two steps forward and one step back, where beneficial treatments may improve outcomes, but create an additional problem to solve. Bone marrow transplants (BMT) have transformed the treatment of blood cancers by replacing diseased blood stem cells with healthy ones. An added benefit of BMT is that immune cells from the transplanted donor are often able to help fight cancer cells. Unfortunately, not all cancers respond well to these donated immune cells. In reactive blood cancers such as leukemia, donor (or graft) T cells effectively attack tumor cells, referred to as an effective “graft versus tumor” response. In contrast, cancers like myeloma are inherently resistant to this therapy. So what makes blood cancer cells susceptible to detection and destruction by donor immune cells? That’s the question being investigated by researchers in the lab of Dr. Geoffrey Hill, a professor in the Division of Clinical Research and director of Hematopoietic Stem Cell Transplantation and the Fred Hutch Center for Integrated Immunotherapy Research. In their recent Sciences Immunology study led by postdoctoral researcher Dr. Simone Minnie, researchers found that this resistance in myeloma was caused by the functional depletion of donor T cells by exposure to foreign antigens on recipient cells, rather than by fighting against tumor cells. When Minnie figured out how to fix this T-cell depletion problem, she encountered a new one – the remaining T-cells weren’t in an activated tumor-fighting state. Using creative approaches, Hill researchers found an innovative way to activate these T cells and developed a potential therapeutic approach to combat these difficult-to-treat blood cancers.

To understand what renders certain cancers insensitive to the beneficial graft-vs-tumor response after bone marrow transplantation, Dr. Minnie has developed reactive (leukemia) and resistant (myeloma) preclinical models. The researchers predicted that one reason for this difference in response to treatment could be that myeloma causes donor T cells to become exhausted, which can happen if the T cells aren’t able to fight a cancer fast enough. and become functionally depleted and less effective in killing malignant cells. The authors profiled T cells several weeks after bone marrow transplantation from healthy donor mice (known as allogeneic bone marrow transplantation). In the absence of cancer, the transplanted T cells were exposed to unknown host antigens, or alloantigens, which “resulted in an exhausted T cell phenotype, characterized by high expression of inhibitory receptors on CD8+ T cells,” explains Minnie. Excitingly, they found that “myeloma tumors resistant to graft-versus-tumor effects expressed high levels of complementary inhibitory ligands,” compared to leukemic cells. This indicated that myeloma cells selectively expressed proteins that may be able to shut down the tumor-fighting ability of T cells and promote immune evasion. However, when they tried to block this inhibitory action of myeloma cells, the researchers found that it was still not enough to induce graft versus tumor responses in mouse models of myeloma.