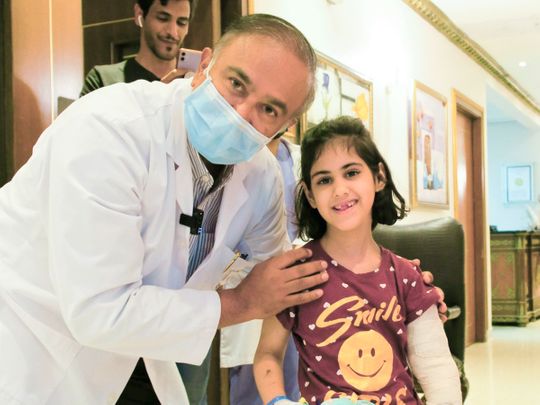 Dr Mohan Rangaswamy, a specialist plastic surgeon and reconstructor at the American Academy of Cosmetic Surgery Hospital in Dubai, alongside the efforts of a qualified doctor, performed reconstructive surgery on the girl’s arm.

A medical team in Dubai successfully performed reconstructive surgery on the arm of a 6-year-old Arab girl who suffered from a giant mole on her arm; a rare case affecting 1 in 50,000 births.

Dr Mohan Rangaswamy, a specialist plastic surgeon and reconstructor at the American Academy of Cosmetic Surgery Hospital in Dubai, alongside the efforts of a qualified doctor, performed reconstructive surgery on the girl’s arm, thanks to which he was successful to develop new skin on the arm.

Dr Mohan uses a modern technique. A tissue stent is used to generate new skin, after which it is then transplanted into the areas where the darkened skin has been excised.

He explained that an expandable balloon was inserted under the normal skin of the back and that the balloon was injected with saline water at regular intervals. Through this technique, the body produces natural skin in the same way that the pregnant body expands and produces new skin. After 4 months, the balloon is removed and the excess skin is removed to cover the area where the mole was removed.

Normal skin was transferred from the back to the arm after removing parts of the mole. The remaining forearm mole will be removed and replaced with the skin on the thigh using the same technique.

Dr Mohan stressed that it is important to start treating moles at an early age so that a child can benefit from the natural growth of the skin.

He added: The ideal age to start this process is 3 or 4 years old, and tissue expansion and skin augmentation can be done twice a year to gradually remove amounts of darkened skin up to that it is completely replaced.

The cosmetologist warned against neglecting cases of large moles, as darkened skin is thin and more prone to tearing, and there are risks of malignant skin cancer when the child reaches adolescence. .

He pointed out that there are risks caused by the old cosmetic procedures used to remove moles, which are based on removing black skin and grafting with other skin: the end result may not be satisfactory for the injured or the parents; the patched skin may not grow larger with age; the area that has been beautified is prone to scarring.

He said that treating giant moles with a laser is not enough because: the blackened cells are deeply embedded in the skin, the laser is not effective in removing all pigmentation; and there is no evidence that the laser can prevent the development of cancer cells.

The girl’s family, Hour, said they were shocked when the girl was born because her arm was covered with a large, black, hairy mole. Parents of children with similar cases told us that they could not reach a doctor to remove this type of mole.

They said the advice they received was to leave the child in this condition until he grows up and then consider having a skin transplant or laser treatment. But our fears about the effects of these surgeries prompted us to contact a plastic surgeon, Dr Mohan, who has performed numerous surgeries for similar cases using tissue expansion to generate real skin.

They pointed out that the girl is now happy with the improved shape of her arm and the removal of large areas of black, hairy skin. He still has a few areas to remove until his whole arm turns a natural color.

Don Dizon, MD on the experiences of gay and transgender cancer patients