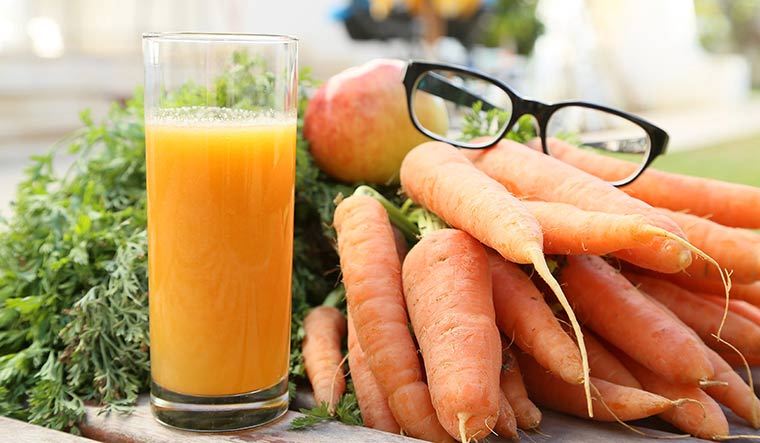 THERE IS GENERALLY no warning signs of glaucoma. It develops so gradually that a person can lose about 40% of their vision without realizing it. Once lost, it is irreversible. But early treatment can often stop further damage and protect your vision.

The only way to know if you have glaucoma is to have a comprehensive eye exam with dilation.

According to the Glaucoma Research Foundation, your eating habits can impact your risk of glaucoma.

Fruit and vegetable consumption may protect against oxidative stress associated with damage to the optic nerve and other eye tissues in glaucoma.

Fruits and vegetables are rich sources of vitamins A and C as well as antioxidants lutein and zeaxanthin. Green leafy vegetables like kale and spinach have been shown to reduce the risk of developing glaucoma.

Nuts and seeds, such as sunflower seeds, almonds, hazelnuts and pistachios, are excellent sources of vitamin E which can keep cells healthy. It also protects them from damage caused by free radicals, which can break down the protective tissues of the retina.

Eating fish such as salmon, tuna, sardines, and halibut rich in omega-3 fatty acids has been shown to reduce glaucoma-related pressure in the eye.

A study published in the British Journal of Ophthalmology showed that people who drank at least one cup of hot tea a day reduced their risk of glaucoma by 74% compared to those who did not.

People with glaucoma should avoid foods that contribute to metabolic syndrome, obesity, blood pressure abnormalities, and diabetes, all of which are risk factors for primary open-angle glaucoma.

A lower consumption of carbohydrates and calories is also beneficial.

Covid-19 may increase the risk of diabetes in children

CHILDREN WHO HAVE HAD diagnosed with Covid-19 have an increased risk of diabetes, according to researchers from the US Centers for Disease Control and Prevention (CDC).

Some studies have already reported that adults who have recovered from Covid-19 have an elevated risk of diabetes. The new report suggests that Covid-19 infection could also trigger newly diagnosed diabetes in children under 18.

Both sets of data showed that children with Covid-19 were more likely to be newly diagnosed with diabetes 30 days after infection than those who were not infected. One data set showed a 2.6-fold increase in new cases of diabetes and the second data set showed a 31% increase.

The study highlights the importance for doctors and parents to monitor the signs and symptoms of diabetes in children, including increased thirst, frequent urination, unintentional weight loss, fatigue, pain in the stomach, nausea and vomiting.

CANCER SURVIVORS who are not physically active and sit for long periods of time are much more likely to die prematurely from cancer or other causes.

For the study published in JAMA Oncology, the researchers used data from 1,535 cancer survivors, aged 40 or older.

More than half of the participants did no physical activity in their spare time, and two-thirds usually sat for more than six hours a day.

More than a third of the participants did not exercise and sat for more than six hours a day. Only about a third got the recommended 150 hours of exercise per week.

Cancer survivors who did not achieve the recommended 150 minutes per week of moderate-to-vigorous intensity recreational physical activity and who sat for more than eight hours per day had the highest risk, more than five times higher risk of death from all causes, cancerous and non-cancerous.

On the other hand, being physically active was associated with lower risks of all-cause and cancer-specific mortality compared to inactivity and may reduce the negative impact of prolonged sitting.

BREASTFEEDING WOMEN have a lower risk of stroke and of developing and dying from heart disease.

Breastfeeding has already been linked to lower risks of breast cancer, ovarian cancer and type 2 diabetes.

The Austrian study published in the Journal of the American Heart Association used data from nearly 1.2 million women from eight studies conducted in different countries between 1986 and 2009. The average age of the women was 51.3 years at the start of the study.

No fewer than 82% of women said they had breastfed at some point in their lives.

Women who breastfed for any length of time were less likely to develop heart disease, have a stroke, or die of heart disease compared to women who had children but had never breastfed.

The benefits seemed to be even greater for those who had breastfed for up to a year.

The World Health Organization has long recommended that women exclusively breastfeed their babies for at least the first six months of life.

Men who experience more relationship breakups and live alone longer have higher levels of inflammatory markers in their blood, which can put them at risk for age-related diseases, such as cancer, heart disease and diabetes type 2:
Journal of Epidemiology and Community Health

Removal of ovaries with hysterectomy before menopause increases risk of death

WOMEN UNDER AGE out of 50 who have had their ovaries and fallopian tubes removed during a hysterectomy for non-cancerous reasons have an increased risk of death, according to a Canadian study published in the BMJ.

Surgical removal of the ovaries and fallopian tubes, a procedure known as bilateral salpingo-oophorectomy (BSO), is the most common major surgery performed on non-pregnant women worldwide, according to the Organization for Cooperation and economic development.

It is often offered to women undergoing a hysterectomy to prevent the future development of ovarian cancer.

Over two lakh women aged 30-70 years undergoing non-malignant hysterectomy were followed for an average of 12 years.

Women under 50 who had the surgery had an increased risk of death. But the same risk was not seen in women over 50.

The risk of death gradually decreased as women approached menopause and was eliminated after the average age of menopause.

PEOPLE WITH GUM DISEASE are more likely to develop other chronic diseases, including heart disease, diabetes, hypertension and mental disorders.

For the UK study published in the journal BMJ Open, researchers compared the medical records of 64,379 patients with a history of periodontal disease, including gingivitis and periodontitis, with 2,51,161 people without the disease.

The average age of the cohort was 45 years old and 43% were men.

Given that poor oral health is extremely common, the study reinforces the importance of regular dental checkups for the “prevention, early identification and treatment of periodontal disease” and for reducing the burden of future disease. chronicles.