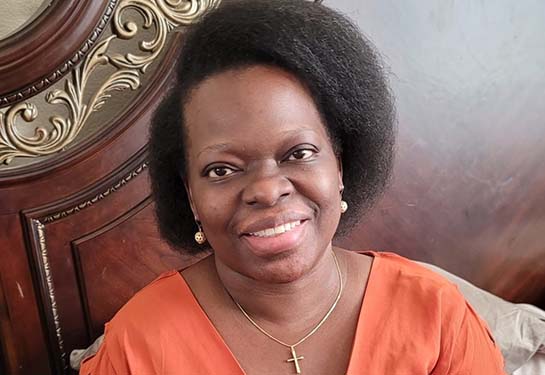 Ruth Nambooze Tucker was just 42 when she started experiencing joint pain in her ankles, knees and lower back. As a respiratory therapist, she thought her 12-hour shifts were starting to take a toll on her body.

But a year later, Tucker’s joint discomfort was still present and his back pain had increased significantly. She started to think something was wrong and made an appointment with her GP.

“During my first appointment, my doctor told me that joint and back pain were normal with age,” Tucker recalled. “He recommended me to take Aleve, gave me stretches to do, and scheduled me for physical therapy.”

Unfortunately, physical therapy appointments made Tucker’s pain worse. At that time, a colleague recommended that she see a chiropractor. But after 18 sessions with a chiropractor, Tucker’s conditioning remained the same.

“The chiropractor told me he’s never seen a patient’s condition stay the same after so many appointments,” Tucker said.

After three years of overcoming his discomfort and pain, Tucker began to have trouble standing. When she walked, she veered to the right and had to compensate to walk straight. Tucker made another appointment with his doctor.

“During that appointment, my doctor finally ordered X-rays of my back and said I was fine,” Tucker said. “That’s when I started to doubt the quality of care I was getting. I did not feel heard.

A few months later, the big toe on Tucker’s left foot began to swell. It wasn’t painful, but it made it even harder for her to walk. During a virtual appointment, his doctor said he was not worried as it was not causing him pain.

In November 2020, Tucker was in extreme discomfort. His joint pain had spread to his shoulders, elbows and fingers. She couldn’t cough because her ribs were so sore.

Tucker’s doctor ordered an MRI of his lower back, which revealed a pinched nerve and low back fractures of his vertebrae. Despite the results, her doctor suggested rehabilitation to ease the pain.

“That’s when I decided to switch health care providers,” Tucker said. “Physically, I had changed so much that I couldn’t even interact with my children anymore. I was tired of not being listened to and I started to lose hope that I would get better.

Tucker moved on to UC Davis Health and visited the pain management clinic.

“I still remember the date starting at two in the afternoon and not ending until 5 p.m.,” she said. “They wanted to hear my whole story and said they yearned to find the source of what was causing my pain.”

I am very grateful to all the physicians and departments I interacted with at UC Davis Health. You see that they want to help you and involve you in every step of your care. When you are in pain and emotionally drained, you want to be cared for by someone you trust and who listens to you. —Ruth Nambooze Tucker

The doctor ordered a full panel of blood tests and discovered extremely low levels of phosphorus, a mineral essential for bone formation. Tucker was referred to the Division of Endocrinology, to see a specialist who focused on metabolic bone disorders.

“Seeing that Ms. Tucker had multiple fractures and low phosphorus levels, we knew there was an underlying reason why she fractured so easily at such a young age,” said Polly Fu Teng, assistant professor. endocrinology and orthopedic surgery.

Tumour-induced osteomalacia is a weakening disease of the bones caused by one or more slowly growing, usually benign tumors. These tumors produce high levels of FGF23, which limits the ability of the kidneys to reabsorb phosphate. Early signs of the disease, also known as oncogenic osteomalacia, include broken bones, bone pain, and muscle weakness.

“One of the challenges with this disorder is that these patients go undiagnosed for years,” Teng said. “These tumors are classically very difficult to find and fewer than 1,000 cases have been reported worldwide.”

Teng ordered a dotatate PET scan for Tucker, which is commonly used to find and monitor neuroendocrine tumors. The results showed a large mass on the big toe of Tucker’s left foot, the same toe that had swollen the previous year.

“It was such a relief to finally learn what was wrong with my body and have a plan to fix it,” Tucker said.

In September 2021, more than four years after his joint and back pain began, Tucker underwent surgery to remove the tumor. His recovery is ongoing and his phosphorus levels are still low, but have improved. Tucker is now pain free as she continues to take phosphorus and activated vitamin D medication to maintain her levels.

“I’m so grateful to all of the physicians and departments that I interacted with at UC Davis Health,” Tucker said. “You can see that they want to help you and involve you in every step of your care. When you are in pain and emotionally drained, you want to be cared for by someone you trust and who listens to you.