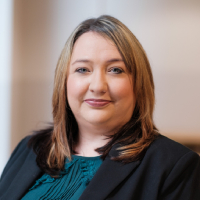 Experienced serious injury lawyer Kerry Gillespie has been credited with establishing her position as an “integral figure” at Hudgell Lawyers by being promoted to Associate Solicitor.

Since joining in 2021, Ms Gillespie, who works from the firm’s Manchester office, has developed her own impressive caseload of serious injury claims, many with potential settlement values ​​in damages in the seven figures.

Providing a support role to Serious Injury Managers Sarah Patten in Manchester and Samuel McFadyen in Hull, she also helped reshape a growing department while playing a leading role in representing and supporting a group of more than 150 injured survivors of the Manchester Arena bombing in 2017.

Ms. Gillespie has also played a pivotal role in establishing and implementing a dedicated commitment to critically injured clients, which ranges from providing immediate and extensive support to clients and their families from the outset from a complaint, to the guarantee of longer-term vital assistance. provided well after the legal matters are over.

She also took the lead in Hudgells’ work in supporting those injured in military service, either through negligence claims against the Department of Defense or through the Armed Forces Compensation Scheme run by the government.

More recently, the department launched support for former British servicemen seeking compensation from the US government in relation to serious illnesses, including cancers, caused while at Camp Lejeune in North Carolina between the 1950s and 1980s. , when people were exposed to contaminated water supplies.

Lists of partners provide a “clear path” to managerial responsibility

Me Gillespie, a lawyer since 2008 and specializing in claims for spinal cord injuries and amputations, becomes the 12e member of Hudgell’s legal team to be promoted to partner since the roles were first introduced in January last year.

Since then, five of the original eight partners, including Mr. McFadyen, have been promoted to management positions.

Rachel Di Clemente, Managing Director of Huddell Solicitors, said: “I am delighted to confirm Kerry’s appointment as Associate Solicitor. This reflects the significant impact she has had since joining the firm last year. She has become an integral part of the legal teams supporting major corporate files and is also heavily involved in business development.

“We established Associate roles to reward high performing staff who not only are committed to doing great work for our customers, but also demonstrate dedication and passion every day to help the business grow and grow. to grow

“It is a testament to the success of the roles that since their inception in January 2021, five of the original eight groups have been promoted to leadership positions, and we have made four additional associate appointments.”

The Hudgells serious injury team was reshaped this year following the decision of former personal injury manager Jane Woodcock to step back from her day-to-day leadership role after 23 years with the team. ‘company. She now supports on a consulting, part-time basis.

Solicitor Sarah Kidd, who was also part of the first group of associates, has also been promoted to personal injury manager, overseeing cases that will fall under future fixed fee limits, with values ​​up to £100,000.