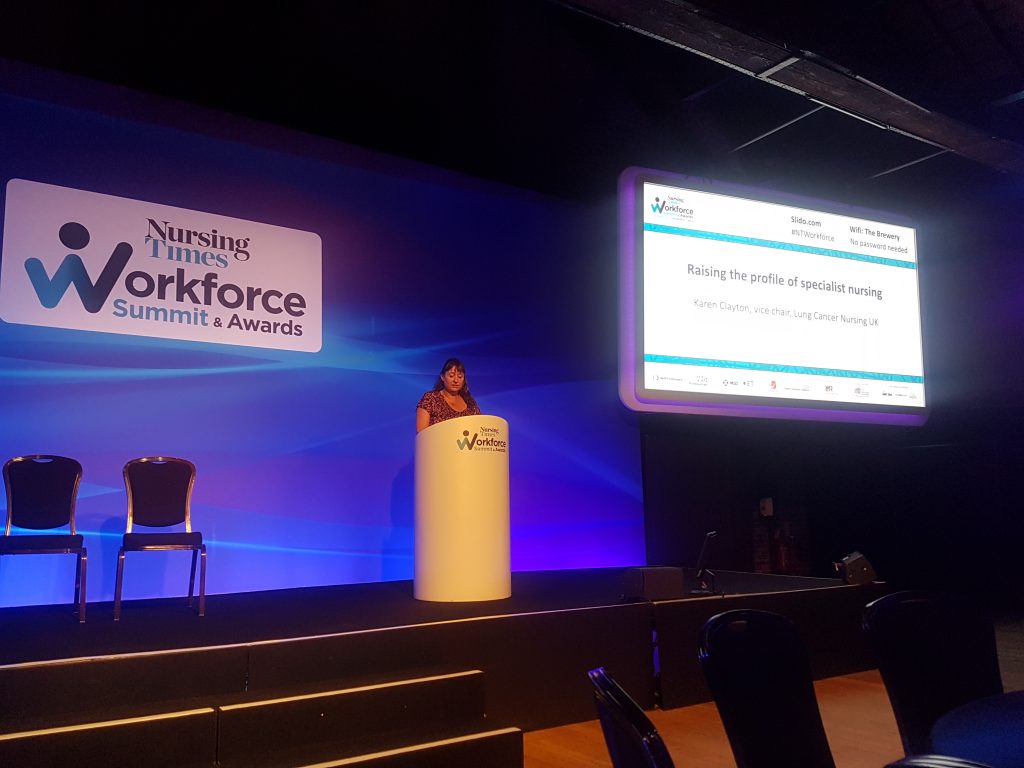 The role of the lung cancer nurse is currently poorly understood, according to a prominent representative of this group of nurses.

“As room nurses know, patients tend to open up more to you than to consultants.”

â€œI go into the ward and I can see nurses watching me say ‘oh she only sees two patients, that’s a great job’,â€ Ms. Clayton told delegates at the event, which took place. held in person at The Brewery in London.

Ms Clayton and her team have a current caseload of 324 patients both in the hospital and in the community.

Her hope was that the cadre could help â€œbreak the mythâ€ of the role, as well as encourage more nurses to pursue lung cancer nursing and help existing specialist nurses advance professionally.

She noted that many lung cancer nurses had been redeployed during the pandemic and said even before Covid-19 they had been asked to cover other duties, attributing this to a general lack of knowledge of this. that the role involved.

Explaining her own redeployment, she said she received an email suggesting she was returning to A&E, where she had previously worked, “my colleague was going back to a respiratory department, that’s where she came from, and another colleague went to a general service “.

She said they were “torn” by the decision because they wanted to help their non-cancer colleagues, but they also knew that many lung cancer patients were “isolated” and protected.

Ms Clayton explained that this had happened before the pandemic: “It’s not just a Covid problem, a lot of lung cancer nurses worked four days a week and then redeployed, so for one day a day. week, patients were missing “.

She also praised rotation as a way to ensure that “people don’t get the wrong one on the role” and to expose nurses to specialist nursing roles early in their careers.

Ms. Clayton outlined the day-to-day and general framework of the role itself.

At the diagnostic level, Clayton said nurses have taken patients with a “suspicion” of the disease through “numerous investigations”, some of which may not be understood.

She pointed out how the role becomes administratively burdensome, as the nurse specialist must also be aware of patients’ transport, social and family commitments, as this could affect their ability to get to appointments.

“We work closely with our research nurses, identifying patients for trials and the oncologist”

Ms Clayton said specialist nurses were ‘patient advocates’ and added:’ As the nurses in the room know, patients tend to open up more to you than to consultants, and they will tell you. things they want you to say about them on behalf of. “

Once a patient has been diagnosed, Ms Clayton said nurses perform an assessment on them, taking into account psychological, emotional, physical and also financial well-being, because “cancer is a very expensive disease”.

Rehabilitation, she said, had become a “big part” of the lung cancer journey for patients. Nurses had to make sure that a patient was in the best possible position before starting treatment. This included monitoring â€œexercise tolerance, nutrition, smoking cessation, alcohol dependenceâ€.

The second area of â€‹â€‹the process was processing; Ms Clayton said nurses have been reviewing treatment options with patients.

She said specialist nurses “need to know” the range of treatments available and their side effects and give patients time to answer any questions they have to make sure they understand the process.

After the treatment, and if all was well, then came the follow-up. Ms. Clayton explained that to her confidence, there were two stand-alone weekly clinics that oversaw patient follow-up.

She said the team followed the patients for five years; if there were any signs that the disease was recurring, the nurse would bring the patient back to see a respiratory consultant or oncologist.

â€œMy team in East Cheshire is trained in special and palliative care, we also have community care nurses and follow many patients in the community,â€ she said.

Finally, Ms Clayton said she started her career as a community career and social care played an important role in her role.

She spoke about the areas the RNs have also worked on in the context of the four key areas, namely emotional support, research, education and training, and collaboration.

Reflecting on the emotional support, she said: “I think if Covid hasn’t taught us anything else, we need to take care of ourselves, our colleagues and also our specialists.”

Regarding research, Ms. Clayton spoke of her â€œloveâ€ of the field.

â€œWe are working closely with our research nurses, identifying patients for trials and the oncologist,â€ she added.

Ms. Clayton stressed the importance of collaboration when it comes to patients, citing an example where the team had worked with multiple agencies on a refugee patient case.

She became emotional as she described how the team worked with social services to bring the patient’s family, a woman and her son, to the UK as well as to homeless shelters as the patient also experienced roaming.

â€œAlthough he had a very sad ending, in the fact that he passed away a few weeks ago his wife was here with him and his son. I planned his funeral for him because his wife is not speaking. not English, â€Ms. Clayton said.