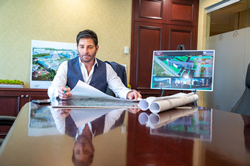 â€œLast year, an estimated 1.8 million new cases of cancer were diagnosed in the United States. By 2030, the number of cancer survivors is expected to reach 22.2 million, â€said Joseph Simone, president of Simone Development Companies.

The U.S. Census predicts that by 2034 there will be more seniors than children in the United States. Risk factors for cancer include old age and obesity. From 1999 to 2018, the obesity rate in the United States increased from 30.5 to 42.4 percent of the population.

â€œLast year, an estimated 1.8 million new cases of cancer were diagnosed in the United States. By 2030, the number of cancer survivors is expected to reach 22.2 million, â€said Joseph Simone, president of Simone Development Companies.

In response to these demographic trends, new cancer centers are being developed or planned nationwide. Recent announcements include the $ 100 million Our Lady of the Lake project in Baton Rouge, Louisiana; Franciscan Health’s $ 43.2 million project in Lafayette, Indiana; and the City of Hope’s $ 1 billion project in Irvine, California.

“A common denominator in many of these communities is an effort to bring advanced cancer treatment to communities where cancer patients have to travel long distances to receive such care,” said Joseph simone.

Simone development companiesThe country’s cancer care contribution includes the construction of the Purchase Professional Park in Purchase, NY, home of the Westmed Medical Group, which has a strong oncology department.

â€œSimone Development Companies is poised to help healthcare providers respond to the dual demographic trend of aging and obesity that will lead to millions more cancer cases over the next decade,â€ said Joseph Simone. â€œInnovations in cancer treatment will stimulate the construction of new surgical and radiotherapy facilities. We are already seeing this proliferation of cancer centers in many places, such as the New York metro area. “

Share the article on social media or by email: