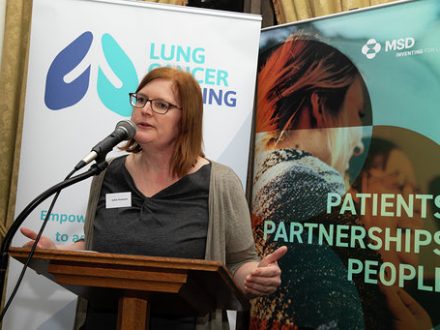 The pressure and strain on nurses during the coronavirus pandemic has been widely publicized, but a key group that has gone unrecognized are cancer nurses. Breastfeeding time spoke to one of the people leading the conversation about the challenges cancer nurses face.

Jackie Fenemore is a clinical nurse specialist in lung cancer and president of Lung Cancer Nursing UK (LCNUK). Highlighting the accumulation of patients since the emergence of Covid-19, she noted that the UK Lung Cancer Coalition (UKLCC) has recommended that the workload for a specialist nurse not exceed 80 new patients per year.

“They had to deal with things outside of work, and also come to work and deal with difficult situations, with patients in difficulty; not being able to see his relatives “

However, within Ms. Fenemore’s team, there were four specialist nurses and two advanced nurse practitioners for approximately 2,000 new patients per year. “Our workload is huge,” she said. “I know that for most people who work in a district general hospital, it is on average 200 patients, and to do the job properly, there should be around 80.”

A report released by LCNUK at the start of the pandemic, in March 2020, featured an instant survey, which found that 47% of the lung cancer nurses who participated treated more than 200 patients at a time. More than three-quarters of respondents said they felt there were simply not enough nurses to meet national guidelines.

Meanwhile, a report released last month by Macmillan Cancer Support warned that cancer nurses in general were “overworked”, being there for patients in their greatest need while facing “physical and pressure”. emotional ”of the pandemic. In its report, Cancer Nursing on the Line, the charity said: “Cancer and the devastating impact it has on life should not be forgotten, neither our nurses and the NHS. Our nurses have been there for us. Now we have to be there for them.

Ms Fenemore reported that Covid-19 created other problems, such as delays in diagnosing cancers, as well as additional strain on the physical and mental health of specialist and general nurses, which she warned the NHS in saw the consequences now.

“When the pandemic hit in 2020, our number of new referrals dropped dramatically; almost immediately in March 2020. The government’s message was to stay home if you cough, and this is one of the most likely symptoms of many of our patients, so I think a lot of cancer diagnoses have been missed. “, she said.

Such delays had created a backlog of patients who “showed up much later,” she said, some up to stage four. Ms Fenemore noted that she and her team were dealing with many naturally upset people who had a difficult prognosis to manage because they were believed to have missed a vital opportunity to have their symptoms detected earlier.

She described how the backlog of diagnostic services grew due to the logistics of seeing people safely during the height of Covid-19, when scanners and equipment needed to be wiped down and cleaned between trips. patients, and the nation has been asked to isolate.

Ms Fenemore highlighted the stress not only caused by the backlog, but also how the attitudes of patients during the pandemic had added to the strain on staff. She detailed a TV interview she saw recently, where an emergency care nurse spoke about being spat and abused.

She went on to highlight other pressures staff faced, for example, when their own loved ones were diagnosed with cancer during the pandemic. “One of my colleague’s sisters was diagnosed with lung cancer within the past 12 months,” she said. “So they had to deal with things that are happening outside of work, and also come to work and deal with difficult situations, with patients in difficulty; not being able to see loved ones during the pandemic and feeling isolated. “

Ms Fenemore also suggested that some patients now see their hospital appointment almost as a “day off,” after being isolated inside their homes for months at a time. This, she said, had seen the level of support patients needed from specialist nurses rise emotionally, as many had treated or were facing a cancer diagnosis in an isolated setting. However, she added: “It is our job as specialist nurses to make sure that it is holistic care that we provide.”

In addition, she pointed out that there was a “doubling of the work” for many specialist nurses, as a lot of information was and still is given over the phone. Often a patient needed help informing loved ones of their diagnosis, which involved repeating the same information over and over again, she said, and that work often fell to specialist nurses.

Regarding retention and recruitment, Ms. Fenemore said she felt the role of cancer nurse was undervalued from a “management perspective”. “They see us as dear nurses, they don’t really understand what our role is,” she said. “Someone showed me an image of an iceberg and it’s a typical visual of a nurse specialist role, as you only see a fifth, the rest is hidden.”

But Ms. Fenemore highlighted why the role of the cancer specialist nurse was so important to patient care and how it could benefit nurses as a career development. “It’s a fantastic role as a nurse, you can specialize in one area and become an expert, so it’s very rewarding,” she said.

“You play a crucial role that patients really appreciate,” she said, noting how specialist nurses were breaking down complex information for patients and helping them make decisions about what was best, not just for them. their own future, but often also for their families.

“What we’re really pushing back is trying to get more administrative support for our specialist nurses, so that we can actually do the nursing”

She explained how the job of the specialist nurses was to guide patients through difficult times, whether that was while waiting for results or staying in contact with them and following up if the cancer came back, and providing referrals. contact details and information.

Noting that this role has freed up other services, she said: “Often a specialist nurse is the first point of contact for patients. It saves them from calling a GP or going to A&E, so we keep other avenues open and not obstruct an A&E or a hospital.

However, Ms Fenemore said that during the pandemic, specialist nurses were left to perform administrative tasks, which previously did not exist and were unrecognized. “A lot of times it’s something very simple, like a patient who misses a CT scan because they don’t have transportation. So what we’re really pushing back is trying to get more administrative support for our specialist nurses, so that we can actually do the nursing, “she said.

Ms. Fenemore also warned of a coming retirement bubble, with many cancer nurses, including herself, expected to retire in the next 10 to 15 years. But she asked if enough new specialist nurses were coming in behind them, as newly trained staff did not always stay in the profession for more than a few years due to the pressures. The staff, she warned, had to be resolved by the government or else the shortages would continue and even worsen. Macmillan Cancer Support calls on the government to invest £ 170million to fund the training of nearly 4,000 additional cancer nurses by 2030.

Last month, Chancellor Rishi Sunak announced the end of the wage freeze for nurses and other public sector workers introduced in 2021-2022 in response to Covid-19. But Ms Fenemore said the insufficient salary was a problem for specialist nurses and other nurses. They needed to be rewarded with a decent level of pay and realistic work in its accomplishment, and work that did not see “staff coming home every day feeling absolutely exhausted,” she said.

Ms. Fenemore added, “I would probably say being a duty nurse is one of the most difficult jobs I have ever had because you are very junior and yet you have a lot of responsibility. The role of specialist nursing is very similar. You have a little more experience, but you are considered an expert in the role and you have such a huge workload that it is very difficult to juggle everything and do a good job for the patients.

Karen Clayton, LCNUK Vice President, prepares to speak about the challenges faced by specialist nurses and thoughts on what needs to be done to meet them at the Nursing Time Workforce Summit November 17 at 9:30 a.m. She aims to raise awareness of the roles of specialist nurses, exploring how we can bring more nurses into these positions and use these roles as an attractive career opportunity as well as a retention initiative.

This story featured in the November print issue of Nursing Times, which themed nursing workforce issues to coincide with the Nursing Times Workforce Summit and the 2021 Awards.

Other stories in the issue included:

Hundreds of people saved from cervical cancer thanks to HPV vaccine, study finds