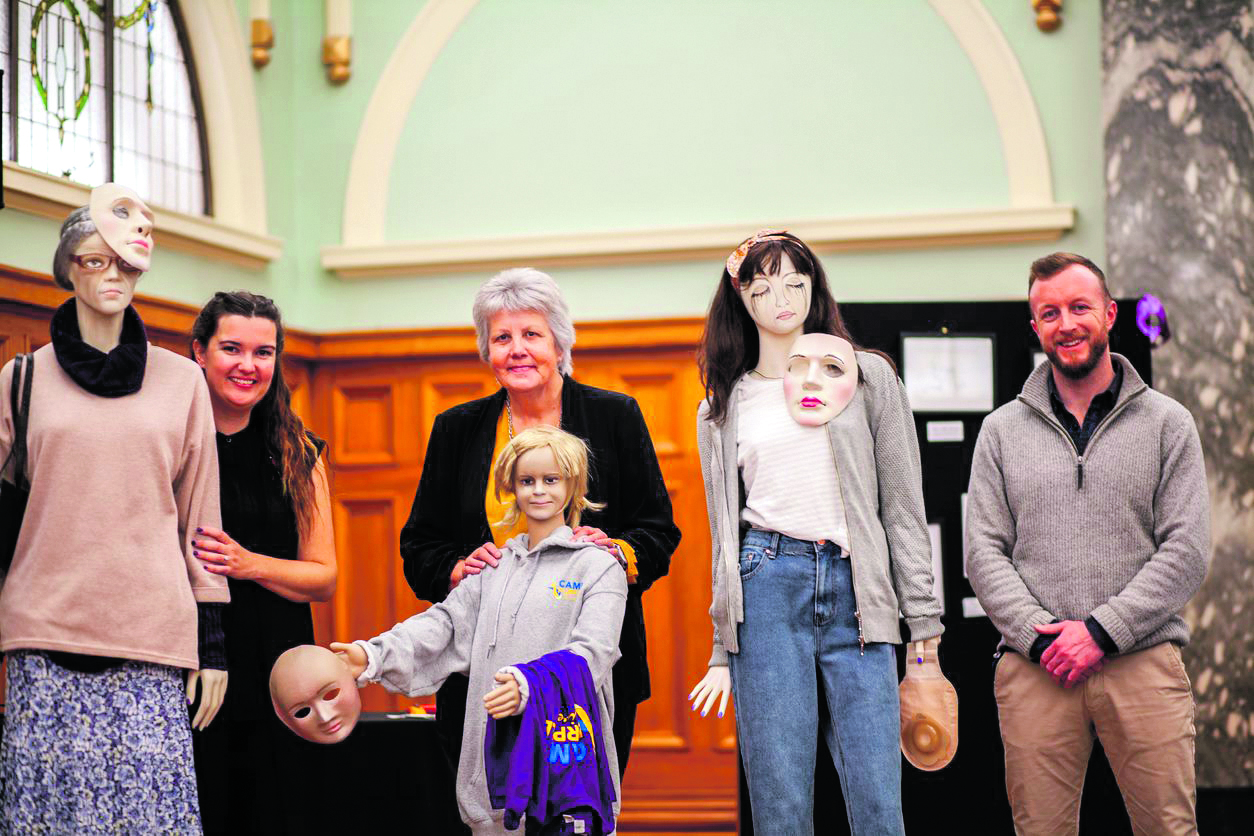 Katie Gracie with Mayor of Masterton Lyn Patterson and MP for Wairarapa Kieran McAnulty at the opening of the Unmasking IBD exhibition in Parliament. PHOTOS/FILEI

For the Inflammatory Bowel Disease (IBD) community of Wairarapa, the appointment of a new gastrointestinal specialist at the area hospital is a “huge relief” – which comes after years of tireless advocacy.

Dr. Wyeth has had an illustrious career in medicine, which includes, in addition to hospital work in the Wellington area, roles as medical director at PHARMAC, regional clinical lead for bowel cancer screening and lecturer at the Wellington School of Medicine.

Dr Wyeth’s appointment was touted as ‘a huge win’ for Wairarapa residents living with IBD and other stomach conditions – who previously had to travel to Wellington or the Hutt Valley to receive diagnoses and treatment .

IBD, an autoimmune disease that attacks the body’s digestive tract, affects more than 20,000 New Zealanders – one of the highest rates in the world, per capita.

Despite these numbers, publicly funded medications are limited and, due to a nationwide shortage of gastroenterologists, people with IBD may face long waits for specialist care.

Lisa Clough, president of Crohn’s and Colitis Wairarapa, estimated that it had been at least five years since Wairarapa Hospital had a permanent gastroenterologist on staff.

Clough and long-serving gastroenterologist Dr Richard Stein, in his capacity as Chairman of Crohn’s and Colitis New Zealand, had been in regular communication with Wairarapa DHB, advocating for the provision of local IBD services.

However, she said, their efforts were often “ignored” by the DHB – leading Dr Stein to treat several Wairarapa patients at his private clinic for free.

Clough said Dr. Wyeth’s appointment will have a significant impact on the region’s IBD community, estimated to number at least 200 to 300 people.

“Before, people traveled for treatment at their own expense – having to pay for transport and time off work,” Clough said.

“Even (in other hospitals) it has been difficult for a lot of people to get a specialist to see them.

“Having a specialist in Wairarapa will also ensure continuity of care: ensuring that follow-up appointments can take place and that people are seen regularly for [manage] their illness – not just when becomes urgent.

“Dr. Stein has been exceptional: his constant battle to get care for those of us with IBD in Wairarapa has been incredible.

Gare’s son Braeden was diagnosed with Crohn’s disease aged 10 – although it took a ‘good 18 months’ of tests and scans, and many back and forths up the hill of Remutaka, before the doctors reached their conclusion.

His father described this period of his family’s life as “pretty awful”.

“We did all the tests possible – it was an absolute nightmare,” Gare said.

“At one point he was vomiting blood. He had to be rushed to Wellington Hospital for emergency surgery – where he had 20cm of his intestine removed.

“As a parent, seeing your child in constant pain and knowing there’s nothing you can do to stop them is heartbreaking. It takes a toll on the whole family.”

Thankfully, 18-year-old Braeden is now in remission and has been receiving regular checkups at Hutt Hospital.

However, Gare said he has now “been off the books” as the hospital needed to prioritize patients in the Hutt Valley area.

He said he must have been “a pretty aggressive defender” of Braeden over the years – which has included several meetings with former Wairarapa MP Alastair Scott and his successor Kieran McAnulty, urging them to help find a local specialist.

“There has been a lot of lobbying behind the scenes. I remember saying to Alastair, ‘man, that’s not good enough’.

“But we are absolutely thrilled to have Dr Wyeth on board now – it will change a lot of lives.

“It will be a huge relief, especially to cut down on that commute time for people who already feel bad about their own bodies.”

Masterton artist Katie Gracie, who was diagnosed with ulcerative colitis 10 years ago, knows that feeling of discomfort all too well.

Her treatment included traveling to Lower Hutt for colonoscopies, which can be quite taxing without considering the three-hour round trip.

Before a colonoscopy, patients must fast for 24 to 48 hours and drink 2 liters of a powerful bowel-cleansing substance – which Gracie describes as “salt water mixed with a lot of grossness”.

“After making the preparation, sitting in [a moving vehicle] can make you so sick,” she said.

“A lot of colonoscopies are done under sedation, so you can’t drive home right away afterwards. So people have to pay for accommodation or make arrangements to stay with their family. Which isn’t exactly fair. quality time, when you’re stuck in the bathroom afterwards.

“Physically, logistically and mentally, it’s a lot to deal with.”

“It adds so much more comfort and convenience. It’s a huge win.

Crohn’s and Colitis New Zealand chairman Dr Richard Stein was delighted to hear about the new developments at Wairarapa Hospital – but said it was vital that the ‘excellent gastroenterologist’ that the Dr Wyeth be “well supported” by the DHB to retain his services.

Stein is a familiar face in Wairarapa: he worked as a general practitioner at Wairarapa Hospital from 2007 to 2010, where he treated patients with IBD.

While working at Hutt Hospital he was able to continue treating patients at Wairarapa for three days every fortnight – but stopped in 2016 citing ‘lack of support’ from Wairarapa DHB.

While at Wairarapa Hospital, Stein trained one of the theater nurses in the care of IBD – and the DHB had pledged to excuse her from theater duties for a day and a half every two weeks. to care for patients with IBD.

“She was absolutely wonderful – I couldn’t say enough about her,” he said.

“IBD nurses are a lifeline for patients. They can do things like track test results and help people manage their symptoms when they have a flare-up of their disease.

“If people are worried about their symptoms, nurses can usually respond within about 48 hours.

“This can have a huge impact on quality of life – and, if patients don’t need to go to the emergency room or undergo surgery, that’s a cost saving for DHB.”

However, Stein said Wairarapa DHB did not allow the nurse he trained to use her IBD care skills.

“They said they couldn’t release her from her theatrical work – which goes back to the deal we made.”

In 2019, he and Lisa Clough met Shawn Sturland, then DHB’s chief medical officer, on behalf of the Wairarapa IBD community – many of whom have been left “in limbo” by the lack of local services.

“I presented DHB with letters from our community, talking about the effect of their conditions on their lives,” Clough said.

“After this meeting, we had no further news.

“Most of the time our attempts to get in touch (via email) were ignored.”

Dale Oliff, chief executive of DHB, said senior staff had “no recollection or knowledge” of the nurse who will be released from theater duties to work with IBD patients, or of any conversations “between the President of Crohn’s and Colitis Wairarapa and the DHB” in 2019.

“There have been a number of senior leadership changes since 2019, and that has resulted in a loss of institutional knowledge,” Oliff said.

She said “Dr Wyeth’s experience and expertise will be of immense value to the local community, and especially to those suffering from inflammatory bowel disease.”