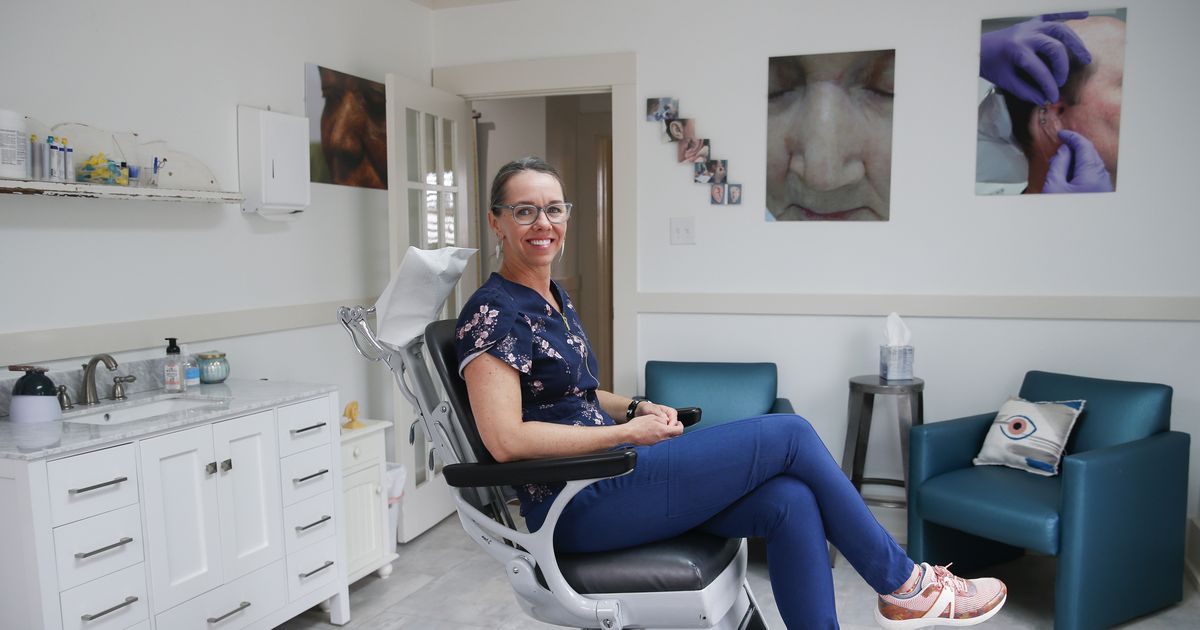 Dallas’ Ian Bonner lost an eye to cancer when he was just 13 years old.

At that time, according to the 67-year-old, if you wanted to survive cancer, the doctor would simply cut out the diseased area and give the patient an eye patch.

“I was a young…I was going into my teens, and I didn’t like it at all,” Bonner said.

In 1979, he found a doctor in Cleveland who made him a prosthetic eye that he would wear for the next 40 years. At the time, prosthetics were not widely available, so they were not as realistic. In 2020, he discovers a new option with his ophthalmologist.

“He said, ‘Listen, I’m going to make a reference. You have to go see Allison [Vest]because I think what Allison can do for you today is pretty spectacular,” Bonner said.

What happened next changed Bonner’s life.

After about five months of care at Vest’s Mosaic Prosthetics in McKinney, Bonner painstakingly created a new silicone eye to replicate every detail of a real one. The eye fits the mold of her face to create a realistic look.

The Bonner affair is the last episode of Parts of the body, a new three-part series on the TLC Network featuring Vest’s work. The series debuted on April 6 and the final episode airs on April 20. From April 21, the episodes will be available on Discovery+.

Vest, 42, a clinical anaplastologist, has dedicated his 17-year career to helping people like Bonner. The hallway of his clinic on West Louisiana Street is lined with two maps showing where his patients live. A map is Texas; the other is the rest of the world.

“By the time people come to us, they’re so excited,” Vest said. “They are so happy. We are kind of the happy icing on the cake.

She creates anything from fingers to ears to eyes. Depending on the case, Vest can take anywhere from a few months to a year to fully develop a patient’s prosthesis.

Vest, a native of South Florida, graduated from the University of Illinois at Chicago with a master’s degree in biomedical visualization. She received clinical training at the University of Florida Dental School and Morriston Hospital in Swansea, Wales.

At 26, she moved to Dallas to work in private practice with one of her mentors. Eventually, she met her husband, Bryan, and they have since had two children.

Susan Habakuk, Vest’s former professor at the University of Illinois at Chicago, said Vest was the type of student who made her job as a professor easier. The two are still conversing, now as colleagues, about the patient cases they have found. Habakuk has been in the business for over 40 years.

Vest and two others – an insurance specialist and a receptionist – make up the team that sees 60 to 80 patients a year. It usually takes four to six appointments to create a prosthesis, she said.

Her handmade prostheses can cost between $5,000 and $13,000, depending on the body part she replicates.

His practice is a Medicaid provider and private insurance policies have no coverage standard. The federal Medicare program considers facial prostheses medically necessary as long as they are prescribed by a doctor, she said.

Vest tries to limit his five-day-a-week schedule to two dates a day. She said she needed a balance between her time with patients and her time in her lab, painting, sizing and designing realistic body parts.

“Sometimes you don’t necessarily talk about why they’re in your chair, but just talk about life in general,” Vest said.

Much of its business comes from doctor referrals and word of mouth. The TLC show also generated interest.

She was contacted in 2019 by Lucky Dog Films, a television company in Maryland. After sending film reels, she signed a contract with Discovery in the spring of 2021 to air her show on TLC. Neither Vest nor TLC would discuss the terms of the contract.

Vest has treated patients ages 7 to 102 for non-load bearing prostheses. Patients come for all sorts of reasons, from accidents to illness.

And she is one of 44 people worldwide who can pursue a career in anaplastology, she said. She is grateful that it allows her to merge her passion for art and science.

It comes down to his patients.

“I found a friend,” Bonner said. “Allison will always be a friend.”

Cancer Care: Beyond Survival – The Lancet