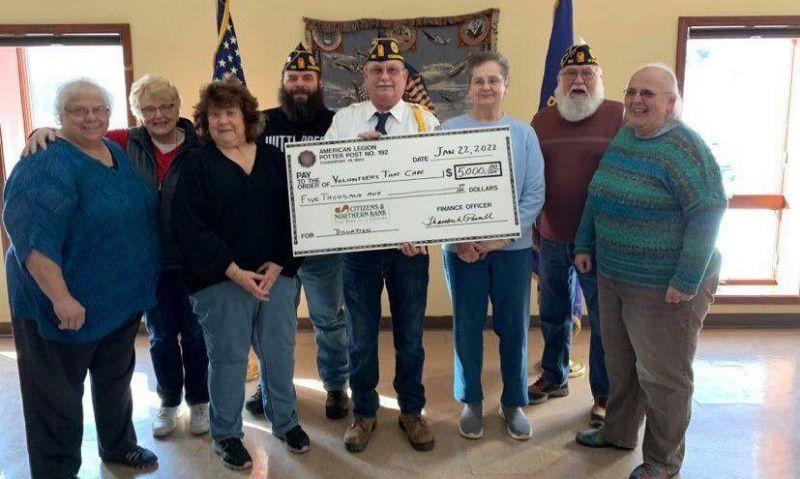 In its infancy in 2012, the non-profit organization Volunteers That Care (VTC) came to American Legion Station 192 in Coudersport, Pennsylvania, asking for help. VTC had made it their mission to raise money to help cancer patients in Potter County get to and from their treatments by providing them with gas cards.

“They had no money,” said Warrant Officer 192 Ted Parsell. “So they came up with that, and by then we were doing very well financially at (Post 192). We felt that this organization, from the start, was going – and has been doing, from the start – a fantastic job in helping our cancer patients. We gave them $10,000 seed capital to help them get started.

In the nearly 10 years since then, VTC has helped nearly 80 cancer patients get to and from their appointments in an area where there aren’t many options. The Patterson Cancer Center at UPMC Cole, a hospital in Coudersport, offers some cancer treatment services but does not provide radiation therapy.

“There’s quite a bit of distance to travel here (for radiation treatments),” Station 192 Commander Bob Pryslak said. “There’s Williamsport and Oleona, a bunch of travelers, because there’s nothing local here.”

Needing additional funding, VTC representatives recently contacted station 192 again, asking to speak at the station’s monthly meeting. And in January, the post presented Volunteers That Care with a check for $5,000 — a significant amount, considering the most VTCs donated in a year is around $10,000.

Parsell said the VTC mission impacted a handful of Post 192 members. “I think there were nine or 10 (members) at the meeting, and five of us took advantage of this program. , in our case with our spouses,” he said. “We felt it was right to give back and help them get the program back on track and start over.”

Post 192 has also stepped up its efforts to help veterans who care in other ways. The organization had lost its meeting space when the area hospital changed hands, so Post 192 opened to allow VTC to use its banquet hall for their meetings.

“We will continue to do this regularly,” Parsell said. “We have a few organizations that we support…that look after wounded warriors. We’re doing (an American Legion anniversary dinner) on March 19, and we’re having about 120 veterans and their guests.

“Our motto is: ‘We have served our country. Now we serve our community. And the community is everyone: the elderly, the children, groups like this one, Volunteers That Care. They are all part of our community. We not only help veterans, but also the rest of the community.