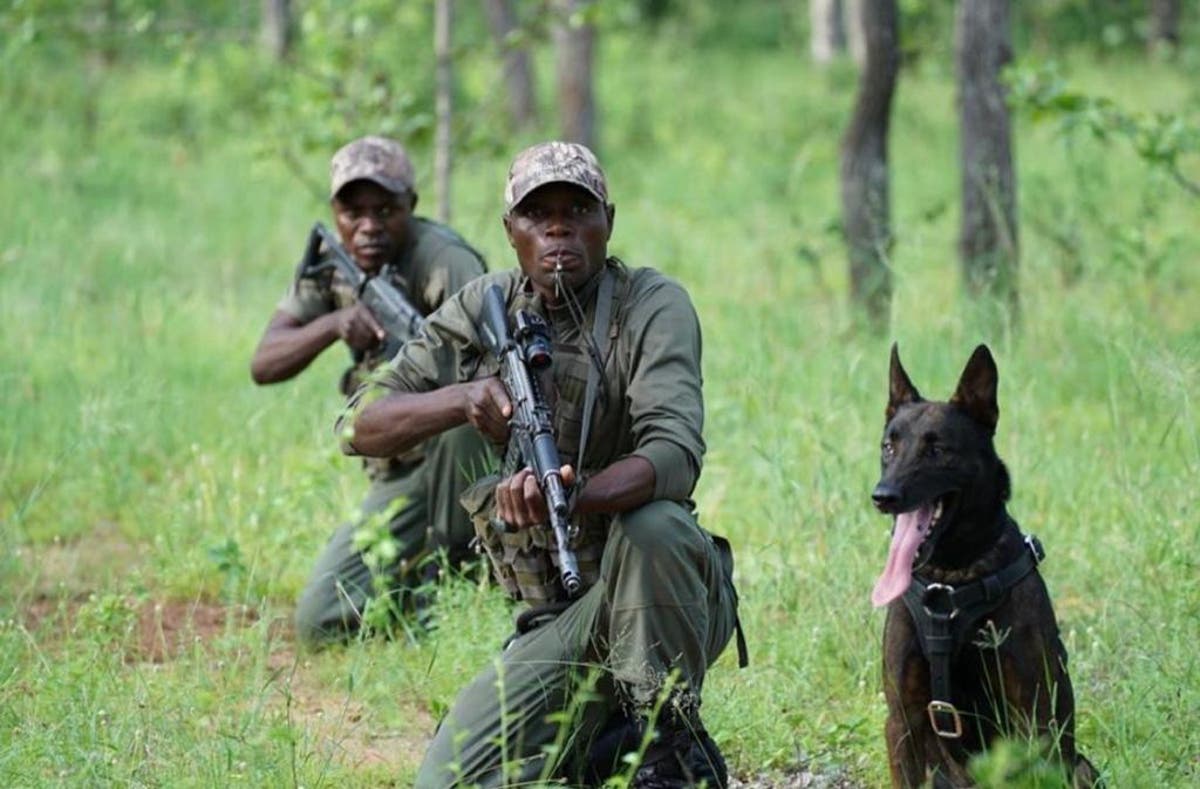 Mathius Mbengo’s day starts at 3 a.m., breaking his sleep to jump into a truck for inspections around the Savé Valley Conservancy in southeastern Zimbabwe.

At 5:00 a.m., Mathius is on foot with his K9 unit partner, crossing the reserve on trace detections.

On the detection tracks, Mathius and his Belgian Malinois partner can run up to 25 kilometers. It’s an active 24-hour cycle and Mathius, 44, and his partner work tirelessly.

All hands on deck by rangers, K9s and conservation actors is why the Anti-Poaching Tracking Specialists (ATS) team reached major milestones in April 2022, marking a decade of monitoring and protection of the Zimbabwean black and white rhino population at the Savé Valley Conservancy.

In 10 years of creating an environment for rhinos to thrive, the ATS K9 unit has taken down dozens of notorious rhino poaching syndicates, racking up 189 years of prison sentences.

Over the past four years, ATS operations have led to the arrest of 29 rhino poachers, while Chief K9 and his handler have tracked down and apprehended four different rhino poaching gangs, a significant achievement in front line of the fight against poaching.

Home to protected species such as elephants, pangolins, painted dogs, cheetahs, lions, sables, pythons, ground hornbills and lappet-faced vultures, the Savé Valley Conservancy holds 25% of the world’s black rhino population. Zimbabwe, making it a key stronghold, one of three Intensive Protected Areas in Zimbabwe for rhino, and one of nine in all of Africa.

Authorities say Zimbabwe has around 1,000 rhinos after poaching populations that decimated three decades ago.

Andrew Campbell, director of the Game Rangers Association of Africa, believes that “the ATS and its K9 unit of 11 Malinois are one of the most active and results-oriented anti-rhino poaching organizations in southern Africa, and certainly in Zimbabwe”.

Among the various advances made by the ATS, there is the arrest of a poacher in the Savé Valley Conservancy thanks to the detections of the ATS, who was in April 2022, sentenced to nine years in prison by a court of Masvingo after a full trial.

The convict, Wellington Bonga, was followed by K9s and arrested in possession of an FN Shotgun with modified bullet heads.

Four other suspects are currently in court for poaching – arrested through ATS detections and tracked by the K9 unit.

According to Bryce Clemence, co-founder of ATS, it is this progress that gives credit to their conservation efforts, as they celebrate 10 years of protecting rhinos and other key wildlife species in the reserve.

Clémence was awarded Best Game Ranger in Africa by the Game Rangers Association of Africa for the Rhino Conservation Awards 2021.

“The last 10 years at the Savé Valley Conservancy have been extremely difficult. Our team has faced many gangs of armed poachers, but we are very proud to have managed to grow our rhino population,” says Clémence.

Australian NGO Save African Rhino Foundation, which has worked in Zimbabwe for 35 years, says the ATS team has played a pivotal role in tackling wildlife crime.

“I had known Bryce, Pete and the Clemence family, through their work as a training organization to support Zimbabwe Parks with rangers for wildlife areas. In 2009, there was a nationwide wave of rhino poaching and a lack of facilities to support it,” says Nicholas Duncan, President and Co-Founder of Save African Rhino Foundation.

“In particular, the Savé Valley Conservancy in the south of the country was under immense pressure from rhino poaching, and that went on for some time. In 2012, we brought ATS to the region for a three-month situational assessment, to try to put systems in place and. find the gaps, and the team has been on the ground, providing security ever since,” Duncan adds.

Under the protection of the ATS, the SVC rhino population has experienced a biological growth rate of 7%, which is above the IUCN recommendation of 5% for game reserves protecting rhinos, and has maintained a poaching mortality rate of less than 2%, also recommended by the IUCN.

This paid off, the overarching goal that underpins all ATS activity, the translocation of four black rhinos, including two pregnant mothers, to Gonarezhou National Park in July 2021: a regeneration program seen as a monumental success for conservation in Zimbabwe.

“ATS has cultivated a very strong intelligence network within the communities. This has contributed to at least 80% of the successes in the fight against poaching,” explains Clémence.

While arrests and convictions are celebrated, poaching cases remain, targeted under the pretense that they address medical issues, from cancer to eliminating toxins and curing hangovers.

In February 2022, a pregnant white rhinoceros cow was poached and killed for its horn at the Savé Valley Conservancy. Along with South Africa, Namibia and Kenya, Zimbabwe remains an important frontier for the conservation of critically endangered species.