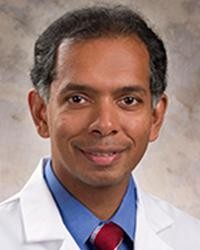 Newswise – UCSF Hematology-oncology department welcomes Krishna Komanduri, MD, as Division Chief of Hematology-Oncology at UCSF Health. Komanduri is an international leader in the fields of hematology-oncology, transplantation and cellular immunotherapy. He will start at UCSF on July 1.

In addition to his role as Division Chief, Komanduri will also take on two newly created roles: Chief Medical Officer of the Helen Diller Family Comprehensive Cancer Center (HDFCCC) as well as the clinical director of UCSF Living Therapeutic Initiative. As division chief, he will also hold the Julius R. Krevans Emeritus Professorship, named after the late UCSF Dean and Chancellor (and a hematologist).

Komanduri comes to UCSF from the University of Miami’s Sylvester Comprehensive Cancer Center, where he has held several key leadership positions, including director of the adult stem cell transplant program, associate director for clinical innovation and , since 2019, as head of a new formed cell therapy and transplantation division. Under his leadership, cell therapy programs grew rapidly at Sylvester, and the program gained national prominence in clinical care and research.

Komanduri’s own research, which is both laboratory and translational, focuses on improving outcomes for patients undergoing transplantation for hematological malignancies, as well as the use of immune therapies for all cancers. He has authored or co-authored six books and 125 articles in the peer-reviewed literature. He has served as Principal Investigator or Principal Investigator for more than a dozen grants and has been a member of several NIH Study Sections. He is an elected member of the American Society of Clinical Investigation (ASCI).

“There is no area of ​​medicine where the needs are greater than hematology and oncology, and no area where the opportunities are more exciting,” said Robert M. Wachter, Professor and Director of the department of medicine at UCSF. “I am confident that Krishna Komanduri will be an outstanding leader for our hematology-oncology business, in all our missions. As someone who began his career with us as a colleague and junior faculty member, we are thrilled to welcome him back to UCSF.

Komanduri received his bachelor’s degree from MIT, majoring in biology with a secondary concentration in English literature. He completed his medical school at the University of Minnesota and then his medical residency at UCLA. In 1994, he came to UCSF for a fellowship in hematology-oncology, including postdoctoral training in Mike McCune’s lab at the Gladstone Institute, and joined the faculty as an assistant professor.

In 1999, Komanduri was recruited to the MD Anderson Cancer Center at the University of Texas at Houston as a physician-scientist. While there, he served as Director of the BMT Fellowship Program and Associate Director of the Hematology/Oncology Fellowship and received the Division of Cancer Medicine Education Leadership Award.

Komanduri has held several important leadership positions in the field of hematological malignancies and transplantation. He served as president of the American Society for Transplantation and Cellular Therapy (ASTCT), the leading professional society in his field. He chaired the American Society of Hematology’s Scientific Committee on Immunology and Host Defense, and serves on the board of directors of the National Marrow Donor Program. He was a founding member of the MIT Think Tank on Financing Curative Therapies in the United States (FoCUS), which develops strategies to ensure broad access to curative cell and gene therapies. He is chair of ASTCT’s cell therapy committee and chair-elect of its government relations committee.

About the UCSF Division of Hematology-Oncology: Each year, the division handles 82,000 outpatient visits and sees approximately 10,000 new patients (outpatient and inpatient visits), with most outpatient care being provided in the Precision Cancer Medicine Building (PCMB) at UCSF in Mission Bay. The division receives $40 million a year in extramural funding, has more than 500 active clinical trials, and its faculty and trainees publish about 450 papers each year. The division is made up of 222 people, including 79 professors. It has strong clinical and research programs in all major clinical specialties of hematology and oncology, as well as innovative areas such as immunotherapy, global oncology, medical education, palliative care and survival, and health disparities.

About UCSF: The University of California, San Francisco (UCSF) focuses exclusively on the health sciences and is dedicated to advancing global health through advanced biomedical research, higher education in the life sciences and health professions and excellence in patient care. UCSF Health, which serves as the primary academic medical center at UCSF, includes leading specialist hospitals and other clinical programs, and has affiliations throughout the Bay Area. The UCSF School of Medicine also has a regional campus in Fresno. Learn more at ucsf.edu or check out our Fact sheet.