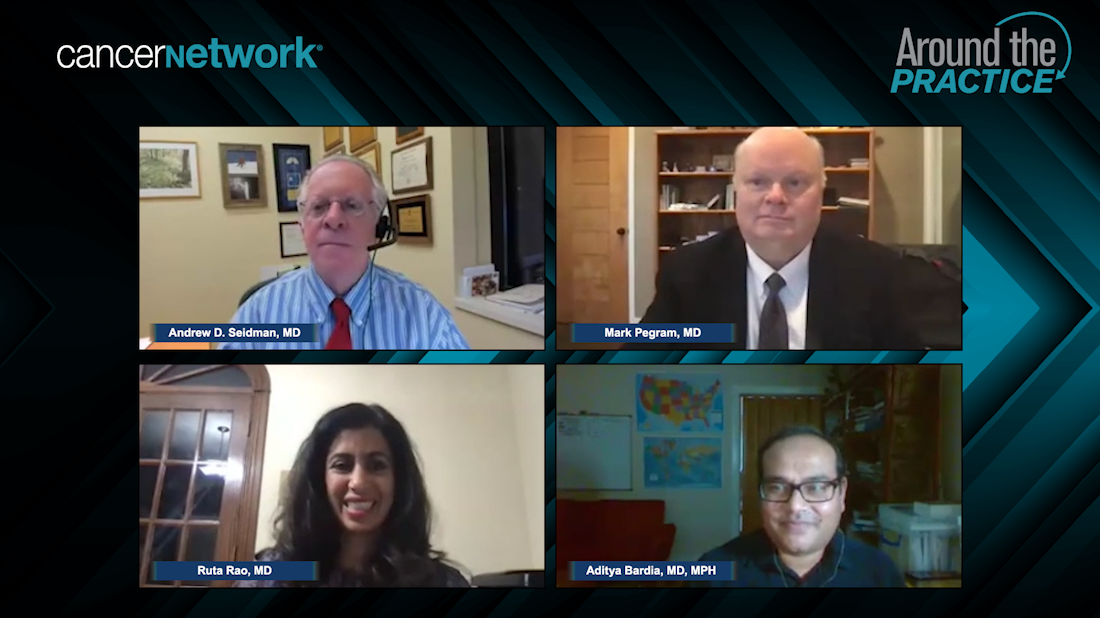 Andrew D. Seidman, MD: After this patient completes the taxane, trastuzumab, and pertuzumab regimen that 90% of you have chosen, [docetaxel], or pacli [paclitaxel], she was kept on her trastuzumab and pertuzumab. And then after a year, then in HP maintenance [trastuzumab, pertuzumab], she has some growth of the primary breast, which was still in place, and liver damage. I’m going to ask our audience to vote on their choice of second-line treatment. The first option is trastuzumab deruxtecan. The second choice is tucatinib, capecitabine, and trastuzumab. The third choice is neratinib and capecitabine. We haven’t talked about the NALA trial, and maybe we’ll come back to it. Or trastuzumab emtansine [T-DM1] as a fourth choice. Again, this patient took only double antibodies for a year after good remission, and now she is progressing through the primary breast and into the liver. And we are asked where to go from here. I remember even before I had ADCs [antibody-drug conjugates], the question would be whether to resume the chemotherapy you started with once, or to add a different chemotherapy drug to your antibody maintenance treatment. Here I will consider this as mature results. Let me see if the numbers change. More than half of the respondents would choose trastuzumab deruxtecan. Approximately 10% chose the HER2CLIMB regimen of tucatinib, cape [capecitabine], and trastuzumab. It’s our fault we didn’t announce the NALA trial, and we can discuss it in our comments here, but no one chose neratinib and the cape. [capecitabine]. And about a third chose trastuzumab emtansine. Aditya, do you want to offer some thoughts on these answers?

Aditya Bardia, MD, MPH: Yes. I would say a month ago I would have considered T-DM1 the standard of care. And as directed, as part of the second line in a patient who has had disease progression on THP [docetaxel, trastuzumab, pertuzumab] is T-DM1, and this is based on the results of EMILIA. Now with the results of DESTINY-Breast03, where we have seen improvement in both PFS [progression-free survival] and a tendency towards the OS [overall survival] with trastuzumab deruxtecan, and with positive results, there is a tendency to consider this drug. It should be noted that the drug is not currently approved by the FDA for this indication. But yes, we have the drug available. And for this individual patient, if you don’t want to wait for FDA approval, which will likely happen over time, then it’s not wrong to consider trastuzumab deruxtecan. As for the other options, tucatinib based on HER2CLIMB, this is also reasonable. And in terms of approval of tucatinib, it’s in the second line and beyond, so we could use trastuzumab, tucatinib with capecitabine. Then finally, neratinib plus capecitabine, based on the NALA trial which looked at capecitabine, lapatinib, the same control arm that was used in EMILIA, compared to neratinib plus capecitabine, and showed improved survival without progression, which led to the approval of neratinib. But the incidence of diarrhea was high with the use of neratinib, and that’s a side effect we see with neratinib. And maybe that’s why the usage, at least in this setting, is not high. But it is an agent that could be considered in later lines.

Andrew D. Seidman, MD: Mark, I know the DESTINY-Breast03 data is fresh. Do these results surprise you? Would you have expected a different poll result?

Mark Pegram, MD: No. I’m not necessarily saying I would expect a difference. Even though ESMO [European Society for Medical Oncology] the data is new, it may well be that the doctors who chose T-DM1 in this case are looking at the age of the patient. Maybe this patient has comorbidities, comedications, etc. And the therapeutic index of T-DM1 is particularly high. It is a very well tolerated antibody-drug conjugate, whereas trastuzumab deruxtecan certainly has many chemotherapy-type side effects unlike T-DM1. There is no more nausea, vomiting, fatigue, cytopenia. You should advise this patient to expect much more chemotherapy-like toxicities with trastuzumab deruxtecan compared to T-DM1, and in a balanced discussion, inform the patient not only of the strengths of the DESTINY-Breast03 data. , but also toxicities. And the same goes for the discussion on the T-DM1. In a balanced discussion, you might find that there will still be T-DM1 laggards, even in the modern age, even in the wake of DESTINY-Breast03, for selected patients.

Andrew D. Seidman, MD: The next question in the survey will allow us to dig into differentiation. Consider the next poll question. Which of the following circumstances is most likely to influence the treatment plan? We are talking about this specific case. This is the patient who started with taxane and HP, was on HP for about a year and has now progressed. Are any of these circumstances the main drivers of the decision? 1, visceral disease; 2, a history of interstitial lung disease; 3, maybe the appearance of new brain metastases, if that was a problem for this patient. Are they all of equal importance and are they determining factors in this decision as to where HP is going? Or none of them are important and you are just guided by the high level Phase 3 test data? Do we qualify that? It will be interesting to see if these factors influence how our participants feel.

It’s interesting. So far people are thinking about the big picture, all of the above. There is not a specific variable, visceral disease, interstitial lung disease or brain metastasis, although these are cited separately by 8% of each. But the majority are inclined to think that all of this is important. Ruta, what do you think? I asked you this earlier, I guess, but are you surprised by this?

Ruta Rao, doctor of medicine:Not at all. I would have chosen all of the above as well. And when you see the answers to a question, you say “all of the above”. But when you really see the patient in front of you, I don’t know if they’re all equal. It really depends on the patient as you might have a patient with visceral metastasis, which is 1 or 2 liver metastases, versus a patient who has a liver full of disease and abnormal LFTs. [liver function tests]. And there, obviously, visceral disease takes precedence over some of the other factors; it potentially takes precedence over even the history of interstitial lung disease. Similar to brain metastases, you might have a patient with brain metastases who could be treated with local therapy versus someone who has received all of the local brain therapy and is now progressing only in the brain. They may have liver metastases, but these are stable. These are all equally important, but in every patient one can become more important than the other.