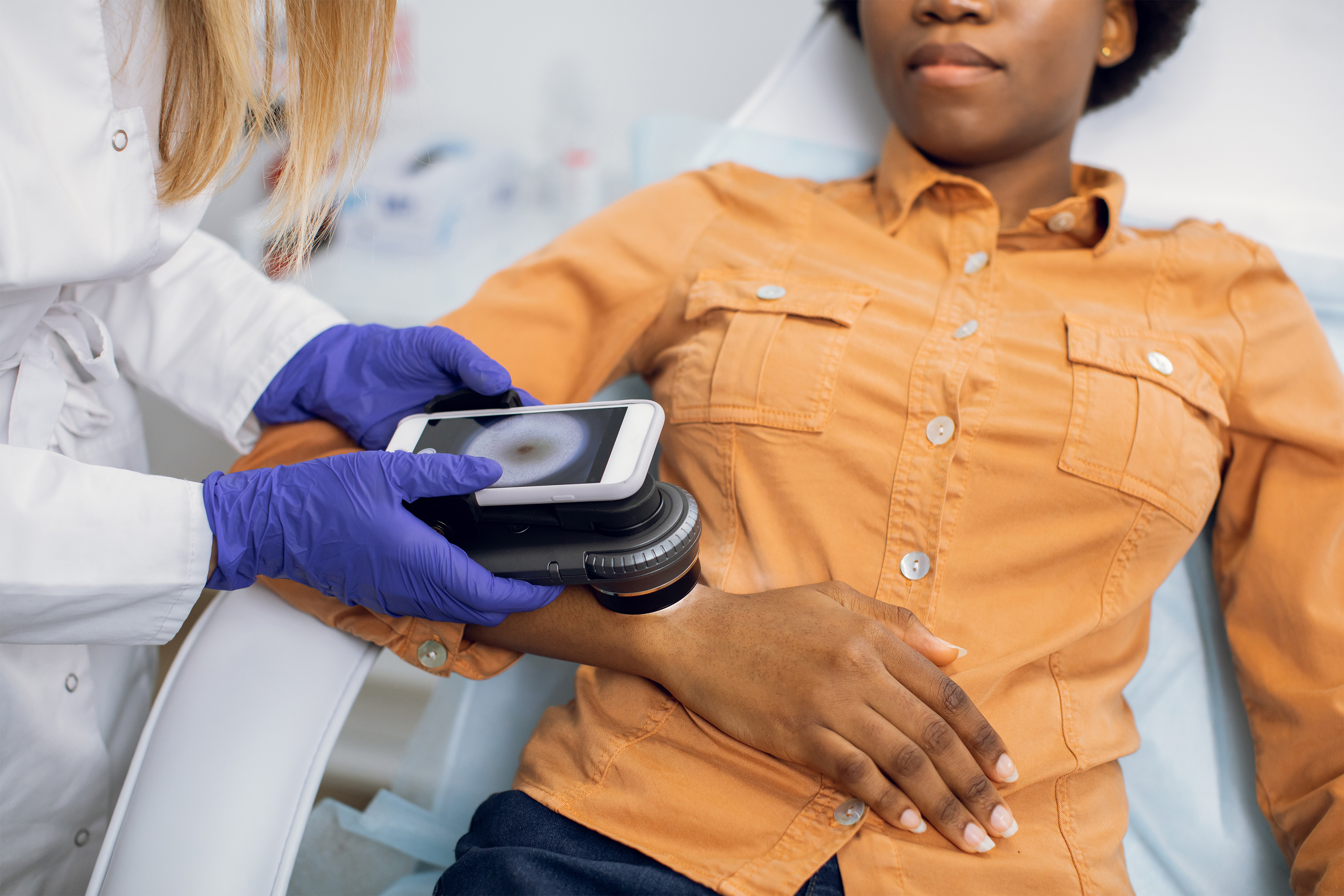 Skin cancer is a risk regardless of skin tone. But it can be overlooked in dark-skinned people.

Brykyta Shelton found herself standing in the queue at a big-box retailer, uneasy as a woman in front of her stared intently at her sandals-clad feet.

Shelton had been on medication for months for what his doctor said was nail fungus, but one fingernail still looked disgusting.

After Shelton completed her purchase, the woman pulled her aside and said that, although she was not a doctor, she thought Shelton was dealing with something more serious than a fungus.

“She’s like, ‘I know I’m just a random stranger, but please go and have it checked out by someone else,'” said Shelton, who lives in a Maryland suburb. in Washington, DC.

Initial lab work did not yield a clear diagnosis, but her new doctor said he was convinced she had acral lentiginous melanoma, a form of skin cancer. Further testing proved him right. Although rare, it’s the most common melanoma subtype in black people, like Shelton. It’s the disease that killed reggae star Bob Marley at 36 and is most commonly found on skin less frequently exposed to the sun, such as the hands, soles of the feet and under the fingernails. Researchers don’t understand what causes acral lentiginous melanoma and they don’t know how to prevent it. It is often overlooked in skin checks or misdiagnosed.

Skin cancer, in general, is often missed or misdiagnosed in black patients.

Historically, black and dark-skinned people have been excluded from efforts to fight skin cancer. Long overlooked by sunscreen manufacturers and a medical community that lags behind in diversity and cultural competency – the recognition of a patient’s heritage, beliefs and values ​​– many have not been made aware of the sun safety or how to check their skin for signs of damage or cancer.

Certainly, skin cancer rates are lower in dark-skinned people. Melanoma is more than 20 times more common in whites than in African Americans, with an overall lifetime risk of 1 in 38 for whites versus 1 in 1,000 for blacks. Melanin offers some protection against sun damage, so those with more of it — those with darker skin — are better protected than those with lighter skin.

But overall, black patients are more likely to be diagnosed with various forms of skin cancer at later stages and have a higher mortality rate, said Dr Janiene Luke, of Skin of Color. Society, a non-profit organization that works to educate doctors and the public about skin health.

Given the known disparities in outcomes, Dr. Valerie Harvey, president of the Skin of Color Society, said two areas of research are needed: studying educational initiatives to see if raising awareness could lead to earlier diagnosis and better survival; and to determine risk factors in dark-skinned patients, including factors leading to the occurrence of melanomas in places with less sun exposure.

Improving cultural competency and diversity within dermatology is just one step towards improving diagnosis and outcomes. According to the most recent data, less than 3% of dermatologists in the country are black. Orthopedics is the only medical specialty with a smaller share.

Dermatology has always been one of the most competitive specialties in medicine, said Dr. Michelle Henry, clinical instructor in dermatology at Weill Cornell Medicine. In addition to strict academic requirements, admission to dermatology programs also depends on connecting with mentors and extensive networking, which can be costly. And that, Henry said, has traditionally created barriers for black medical students who want to pursue studies in dermatology.

“There are so many barriers that make it difficult for a lot of students of color to do the things they need to in such a small and exclusive space,” she said.

Recent initiatives to help students overcome these barriers are starting to work, said Dr. Susan Taylor, vice president for diversity, equity, and inclusion in the University of Pennsylvania’s department of dermatology and founder of the Skin of Color Society. American Academy of Dermatology initiatives include holistic residency application reviews, mentorships, and programs to increase high school students’ interest and prepare them for college and medical school.

Medical apps company VisualDX is working to reduce disparities in medicine through Project Impact by creating a catalog of images that reflect various diseases in different skin colors. Skin cancers may appear different on lighter skin than on darker skin, and because doctors may only have been trained with representations of light skin, the risk of misdiagnosis in people with dark skin increases.

Change has also occurred in the sunscreen industry.

“What it did was it pushed black entrepreneurs, overnight, to come up with their own solutions and their own products,” Martínez-Bonilla said. “Not only because of a lack of availability, but because they are the people who know their needs best.”

Katonya Breaux is one of these entrepreneurs. She was not thrilled when, in her 30s and 40s, she noticed she had moles on her face and neck similar to those she had seen on older family members while she was growing up. She assumed it was just part of getting older. But her dermatologist said it was sun damage.

“I was, literally, shocked. I was like, ‘But I’m black,'” she said, adding that she had no experience with sunscreen growing up. so foreign to me. I thought we just didn’t need it.

After struggling to find a sunscreen that didn’t leave a residue or burn her skin, she worked with a chemist who helped her create a mineral-based tinted sunscreen. At first, she planned it only for her personal use, but eventually she launched Unsun Cosmetics. The Los Angeles-based company educates about skincare and sells products designed for dark-skinned consumers.

Shontay Lundy also struggled to find a sunscreen that didn’t “leave a blue, purple or any other color on my skin.” Until, she says, “I realized it didn’t exist.”

So in 2016, she developed products that leave no residue, eventually launching Black Girl Sunscreen.

Education is fundamental to advertising his business, Lundy said. “Our mission is to equip people of all ages and skin colors with the right sunscreen products to take their skin health seriously and protect themselves from sun damage.”

Shelton, whose chance encounter in a store queue led to her cancer diagnosis, said she became an evangelist for skin self-checks and sunscreen, and that she is now known at her local pool as “the sunscreen lady”. The type of skin cancer she got may not have been due to sun exposure, but it made her aware of skin damage and other types of skin cancer.

She is cancer free since the doctor successfully removed the tumor from her toe and she underwent chemotherapy and radiation therapy. But the experience was traumatic.

Still, she says, she has returned to an active and full life. She said she would be forever grateful to the stranger who took her aside that day, as well as to the doctor who didn’t believe the first group of labs who came back, choosing instead to trust his instincts to begin treatment immediately.

• Avoid direct sunlight, especially between 10 a.m. and 4 p.m. Keep babies out of the sun.

• Use a broad-spectrum sunscreen with an SPF of 30 or higher every day. Reapply every two hours or after swimming or activity/sweating.

• Do not leave sunscreen in the car, as temperature fluctuations can cause it to degrade and lose its effectiveness.

• Wear clothes that cover the arms and legs.

• Wear a wide-brimmed hat to protect your face, ears and neck.

• Examine the skin from head to toe every month. Look for dark spots or patches, or growths that grow, bleed, or change; sores that are slow to heal, or that heal and come back; rough, dry patches of skin; and dark lines under or around fingernails or toenails. Be diligent in checking the nail beds, palms, soles of the feet, head, lower legs, groin, and other places that receive little sunlight. Contact a doctor if you have any concerns.

• See a board-certified dermatologist at least once a year for a full body exam.

KHN (Kaiser Health News) is a national newsroom that produces in-depth journalism on health issues. Along with policy analysis and polls, KHN is one of the three main operating programs of the KFF (Kaiser Family Foundation). KFF is an endowed non-profit organization providing information on health issues to the nation.

This story may be republished for free (details).