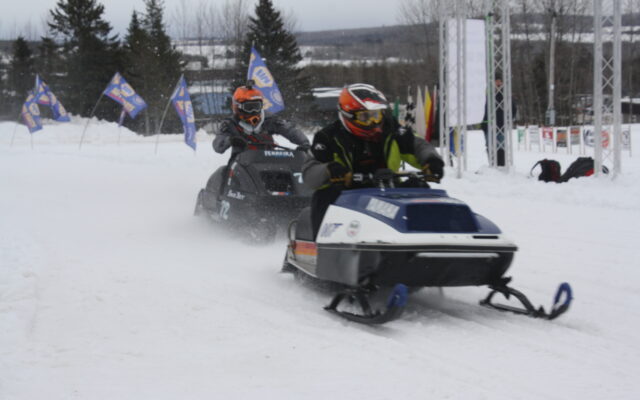 Snowmobilers and enthusiasts gathered at the Northern Maine Brewing Company on Saturday for a series of races that brought members of the community together while supporting cancer patients.

CARIBOU, Maine – Snowmobilers and enthusiasts gathered at the Northern Maine Brewing Company on Saturday for a series of races that brought members of the community together while supporting cancer patients.

The Mega Meltdown Vintage and Kids Endurance races were held in conjunction with Brian’s Ride Cancer Fund and the Maine-based Tame the Track Snowmobile Tour.

Snowmobilers from Maine and New Hampshire took part in 19 competitive races throughout the day, including the Brian’s Bracket Challenge in memory of Brian Caldwell.

Caldwell, who lost his battle with stage 4 gastric cancer in 2014, was a freelance carpenter and motorcycle enthusiast. The Brian’s Ride Cancer Fund began in 2015 when friends and family members organized Brian’s Ride, a memorial motorcycle ride that raised over $8,000 and launched an annual fundraiser of the same name.

Over the years, Brian’s Ride has raised over $130,000 and helped 250 Cary Medical Center cancer patients with expenses not covered by insurance, including travel, accommodations and medical supplies.

Since COVID-19 hit, the fund has continued to support patients through grants and smaller-scale fundraising. This year marks the third annual race, but only the first time since 2019, that the folks at Brian’s Ride have been able to hold snowmobile races in honor of Caldwell.

“Brian was pretty calm. He never liked being in the spotlight,” Brian’s sister Pam Caldwell said. “But I think what would mean the most to him is seeing all these people come out to help their neighbours.”

The Mega Meltdown races were the last in a series of eight races organized by Tame the Track. Hundreds of runners of all ages participated in races held on a specially designed track behind the Brewing Company. Many people had competed in previous races in Maine and were vying for the high point trophy.

Chris Moneypenny of Ossipee, New Hampshire has competed in several racing divisions with his son Henry and family friends. An amateur snowmobile racer, Moneypenny has enjoyed riding in Aroostook County so much that he recently purchased a camp at Smyrna Mills.

“This is our second time [racing] in Caribou,” Moneypenny said. “Competitiveness is great and we’ve met a lot of the same people in previous races.”

Nine-year-old Savannah Pelletier of Woodland was among the young riders who raced in the children’s divisions. Pelletier, who has been snowmobiling since the age of seven, was participating in his second race of the winter.

“I love competition and I love going fast,” Pelletier said of what she loves most about snowmobiling.

Runners and spectators lined up near the track to cheer on friends and fellow runners. Former NASCAR driver Andy Santerre, who now lives in North Yarmouth, stopped by to support his friend Cody Thibodeau from Woodland. Santerre said he particularly enjoyed watching the children’s races.

“It’s a great way to get them started at a young age and show them sportsmanship,” Santerre said.

Thibodeau is a longtime Mega Meltdown participant and said he was happy to compete in support of Brian’s Ride.

“It’s fun, competitive and it’s for a good cause,” said Thibodeau.