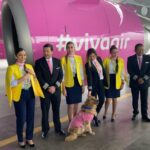 Colombian low-cost carrier Viva held a celebration in Bogotá last week to celebrate the arrival of its new Airbus A320neo from the factory in Toulouse, France. Viva’s connection to the fight against breast cancer is personal. As explained in “Chapter 32 of Airline Biography“ The Viva Effect ”by Board Director Rupert Stebbings, the fight against cancer has always been close to the founders and managers of the company.

Co-founder William Shaw lost his mother to breast cancer. Viva’s first breast cancer awareness aircraft, a first-generation A320 model, was named after Claudia Obando, Viva’s flight attendant, and was flown on its maiden flight by an all-female crew. Executive Chairman and Founding Investor Declan Ryan has lost his father Tony Ryan of RyanAir fame, and his brother Cathal, an accomplished airline pilot and cancer captain, so the battle against disease is in the DNA of the airline company.

Viva uses its charitable arm, the Viva Foundation led by Monica Gil and Tatiana Vásquez to translate the meaning of the airline’s operations into direct action for social good, promoting equity, inclusion, diversity and prevention, with initiatives ranging from teenage pregnancy to breast cancer prevention.

“Flying differently makes us Viva, and landing with opportunities makes us the Viva Foundation. With the arrival of our new pink plane, we intend to go further, broaden the vision of these social aspects which should be a priority for all, such as gender equality, inclusion and diversity, not to mention cancer of the breast. sein, which was our first banner since 2012, ”said Tatiana Vasquez, Executive Director of the Viva Foundation.

Viva recognizes that the airline industry is dominated by men, particularly in the cockpit and boardroom, and seeks to break paradigms by focusing on professionalism, skills and team building, regardless of gender identity or sexual orientation.

“We want to go further, without leaving aside the cause of breast cancer that Viva has led in recent years, we are taking a new step by demonstrating our commitment as a socially responsible airline. This means that we believe that we all have the same opportunities to fly higher, united in our differences, ”said Felix Antelo, CEO of Viva. A message that we had even underlined before with our low cost model, air inclusion and the democratization of the skies, and which is even stronger today.

“At Viva, we believe that we all have the same professional opportunities and possibilities for growth, development and participation. We fly by and for everyone, and we’re as diverse as the places we’ve been. We welcome (the plane) ‘Go Pink’, as a symbol that we have chosen in order to make these causes visible, ”added Antelo.

Data help in the treatment of vulvovaginal health, sexual function after cancer